Sir Thomas Manron, the great administrator said “ In India whoever regulates the assessment of land, really holds in his hand the main spring of the country”. This is true till this day.

Initially, the main duty of the revenue department was to collect land revenue, which was the main source of income of the state. Besides, the department looks after the general administration of the district, having control over other sister departments. Maintenance of Law & Order is one of the most important function of the department.

It may not be an exaggeration to say that in implementation of many socio-economical schemes of the Government, Revenue Department is second to none.

The administrative set-up of Revenue Department may be classified in to 4 stages viz;

Brief description of these stages is as noted below:

I.At the time of Independence .

The area now included in Karnataka state had been distributed over 14 native states in addition to the 2 states of Hyderabad and Mysore and the British Provinces of Madras, Bombay and Coorg. Of the 14 native states, Sandur merged in Bellary district of the Madras state between 1947 and 1950 and the states of Jamakhandi, Mudhol, Ramdurg, Savanur, Aundh, Jath, Kurundwad Senior, Kurundwad Junior, Sangli, WadiJagir, Kolhapur and Miraj Senior and Miraj Junior merged in the Bombay state and some of the territories belonging to these states are found in the districts of Balgaum, Bijapur and Dharwad of Bombay Karnataka.

II.  In the Erstwhile Bombay State.

In the Bombay state the administrative hierarchy was as shown below. This description applies to the set-up immediately before 1st November, 1956 when the new state came into existence. 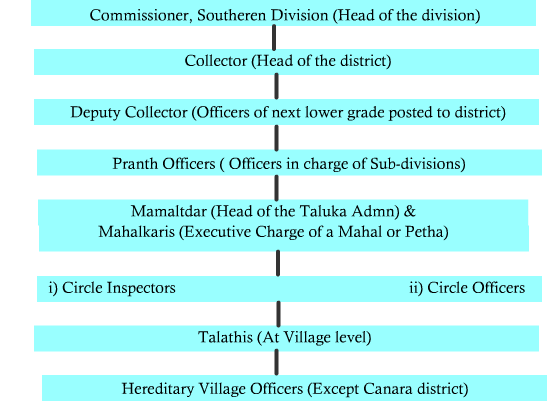 III. After 1956  (From 01-11-1956 to 10-04-2003 )
The new reorganised state was divided in to 4 divisions like Belgaum which had earlier been the headquarters of the Southern Division under the Bombay Presidency (In 1878) was made a Division and divisional administration was entrusted to the Divisional Commissioner. 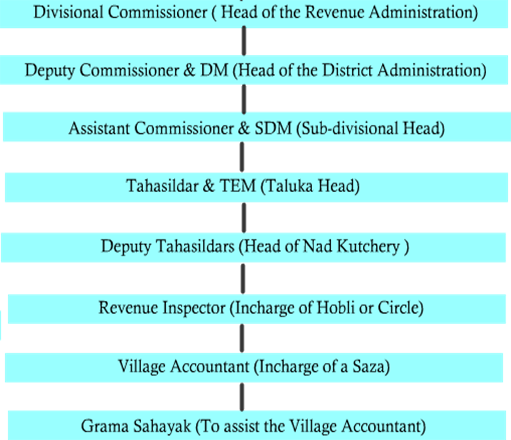 From 08-09-2005 after the creation of the now redisgnated post of Regional Commissioners offices at each divisional headquarters, the administrative set-up in Revenue Department is as shown below;

Powers and Functions of the Divisional Commissioner:

1.      The Commissioner discharged the duties conferred under the Land Revenue Code and also any other law that governed the division.

2.      He was the controlling, supervising and co-ordinating officer at the divisional level, the appellate  authority, who heard appeals against Collector’s decision and enjoyed the power of revision.

3.      The Commissioner had to supervise the proper execution of Government policies in the actual administration of the districts committed to his charge.

4.      The Commissioner was the channel of communication between the District and the Government.

5.      The Commissioner was in charge of the General Administration of the Division and exercised control over all the Revenue Officers and Revenue Courts in the division.

Powers and Functions of the Divisional Commissioner:

The Divisional Commissioner as the head of the Revenue Administration played a pivotal role in the General Administration of the district in respect of both revenue and functioning of various other departments in the division.

1.      Divisional Commissioner acted as a link between the State Government and the district authorities.

2.      He was the Chief Revenue Officer of the division.

3.      He exercised overall supervision of the local bodies within his jurisdiction.

4.      He was the main channel through whom the Deputy Commissioner had to send all proposals pertaining to revenue matters, development programmes, municipal administration etc. to the State Government.

5.      As the administrative head of the division he was responsible for distributing and re-appropriating budget grants to lower offices.

6.      The Divisional Commissioner was the appellate authority above the Deputy Commissioner in matters of revenue administration both in regard to laws and disciplinary proceedings relating to the revenue staff.

In a nutshell, his functions were Supervisory, Controlling, Co-ordinating and Appellate.

The Powers and Functions of the Regional Commissioner as per Government Order dated:08-09-2005 are as noted below;

·         Maintenance of staff, development, training and human  esources   of the Revenue Department.

·         The powers of Divisional Commissioner previously  exercised under various Rules and Sub-Rules. (Appeal  and  Revision)

·         Inspecting Authority - Inspection of subordinate offices as  regards  their  functioning as per Law, Government  instructions and related orders.

·         Supervision of natural disasters and drought relief works and their  control besides crop harvest experiments and waving of land   revenue.

·         Supervision of all types of elections in the division.

·         Release of grants to District offices, Sub-Divisions and  Taluka  offices, Annual budget preparation, preparing  answers to Legislative Assembly/Council questions and  making reports to Sub-Committees of Legislation and Inspection of cases pending in Courts.

·         Review of Inspection of all developmental works of all  Government offices coming under their jurisdiction at least once in a month.

·         To initiate action for non achievement of financial and physical  target and discuss the same with concerned Head  of the Depts., Secretaries and Principal Secretaries to take suitable action to achieve the targets

·         In addition, Inspection of Development Departments, vestigations and review if necessary.

Apart from the administrative powers mentioned above, Government have given statutory powers under 16  Acts/Rules.

Government under their Notification No:RDP:20:ZPS:2006 dated:28-04-2007 have  empowered the Regional Commissioners to take up the inspections of Zilla Panchayat.

Government Under Government Order NO RD:227.Samiti 2007 Dated 05-12-2007 have declared Regional Commissioner as Major Head of the Department.